From Kiosk to the Internet…

From Kiosk to the Internet… 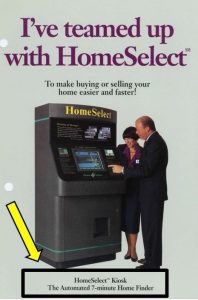 About 50 kiosks were placed in Longs Drug Stores in San Diego County by HomeSelect (Some of you may remember Richard Jansen, President of HomeSelect, which became RealSelect, went public as HomeStore, turned into MOVE, was purchased by Rhuppert Murdock, etc). The data feed for the first listings on REALTOR dot com came from my San Diego regional MLS, Sandicor.

The kiosk contract between Sandicor and HomeSelect stated HomeSelect had permission to “Electronically Display” all of the Sandicor active listings. The perception of “Electronically” did not include the Internet to most people at that time, and the intention here was clearly for kiosk display.

The owner of RealSelect, Richard Jansen, interpreted “Electronically” to include the latest craze, the Internet, when it first began to gain in usage and attention in 1993. Richard then took the same data he was loading on all of the kiosks and uploaded it to the newly constructed, NAR owned website, that, with Laurie Janek’s permission, we dubbed REALTOR dot com (ask Walt Baczkowski about this if you haven’t heard the story) and I was off to Austin.

The first MLS to display on REALTOR dot com with real permission was Austin, followed by Miami.

Check out the wait time at the bottom of the image